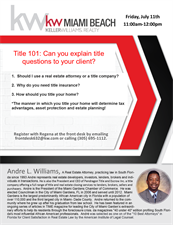 Title 101 - Explaining To Clients What They Need

Title 101—what you need to be able to explain to your client!

2. What is title insurance for?  Can you explain it properly to your client?

André L. Williams is a real estate attorney, practicing law in South Florida since 1993, previously at Holland and Knight LLP. His real estate law firm represents real estate developers, investors, lenders, brokers and individuals in transactions. He is also the President and CEO of Pendragon Title and Escrow Inc. a title company offering a full range of title and real estate closing services to lenders, brokers, sellers and purchasers.

Andre is the President of the Miami Gardens Chamber of Commerce.  He was elected Councilman in the City of Miami Gardens, FL in 2006 and served until 2012.  Miami Gardens is the largest predominantly African American city in Florida with a population of over 110,000 and the third largest city in Miami- Dade County.  Andre returned to the community where he grew up after his graduation from law school.  He has been featured in an ongoing series of articles in TIME magazine for leading the City of Miami Garden’s extraordinary efforts to help its residents through the foreclosure crisis. His work has also been featured in the Huffington Post, NPR and the Miami Herald.  Harvard University recognized André for his distinguished work on behalf of the residents of Miami Gardens facing foreclosure.

André received the South Florida Business Journal’s Up and Comers Award (Finalist) for 2006.  He was also featured as a “Leader 2000” by the Daily Business Review.  André appeared as South Florida's Most Influential in Who's Who in Black South Florida's Inaugural Edition. He has been featured in Success South Florida magazines "40 under 40" edition profiling South Florida's most influential African American professionals.  André was selected as one of the "10 Best Attorneys" in Florida for Client Satisfaction in Real Estate Law by the American Institute of Legal Counsel.

André has a BA in English and American Literature from Harvard and his law degree from Vanderbilt.  He is a Graduate of Ransom Everglades Upper School.